So on a trip to Seattle over Spring Break, my hope was to get some nice  pictures of the Cascade volcanoes to share. On the day with nice weather we went skiing at Snoqualamie Pass and as is typical of me I forgot my camera. On the days that we were in places that normally have good views of the volcanoes (Mt. Rainier or Mt. Adams) the weather was lousy.

But I figured if I am going to do an occaisonal blog, I better do something. So instead of breathtaking photos of volcanoes, you get the picture of a troll. 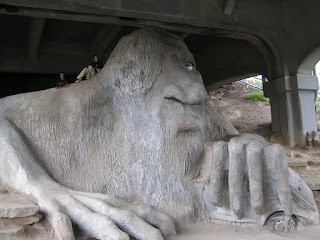 According to the well of knowledge known as Wikipedia. Trolls are members of a race of fearsome creatures from Norse mythology that often live underground in hills or caves (or according to nursury ryhmes under bridges). See hills, caves there is a link to Geology.
Philip
Posted by Philip at 1:09 PM