I know it seems a little backwards, but now that classes are back in session, I have some time to catch up and blog about some of Sam and my summer trips.

Toward the end of July, Sam had a swimming competition in John Day. So we left a day early to go hike and to try and see some new stuff. First we tried to get up to the Elkhorn Ridge, but the 4WD approach road was more 4WD than my pseudo SUV could handle.

Next, we tried going hiking at Anthony Lakes, but there was too much snow on the trail, and we weren't prepared for that. So we headed down to lower elevations and visited the Sumpter Dredge Site.

The Dredge on display is the last of three dredges built between 1912 and 1934. It was operated until 1954 and dug up more than $4 million in gold (at about $34 per ounce). The three dredges together worked over 8 miles of river and created 1600 acres of tailings along the river bank. 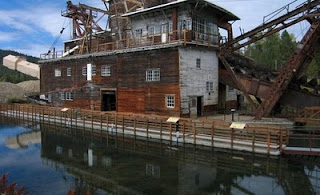 Sam is not all that interested in History so she wasn't that into the Dredge itself  (though we did have a good discussion hypothesizing what the white door that opened from the second deck out into empty space was for.) Sam was interested in paying for her college education, and she noticed gold glinting in the river, so we got a gold pan and a permit and she panned for a little while 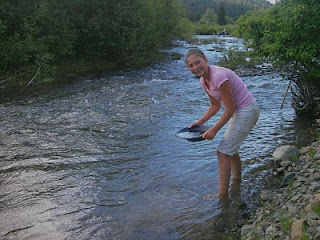 Turns out fools gold is aptly named as that was the only color we had in our pan.

We still had time so we went down to the John Day Fossil beds. We had been here before, and I take a field trip every spring. But she got the obligatory picture in front of the Sheep Rock Fault, and I got to do some reconnaissance for future field trip stops. 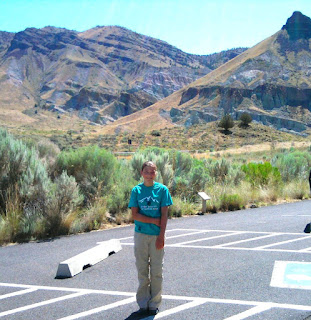 It was a good trip, and as a final note, she won all her races at the meet the next day.
Posted by Philip at 2:22 PM

How about the gold did you find any cause when I went down there i got some gold :-)Jacob