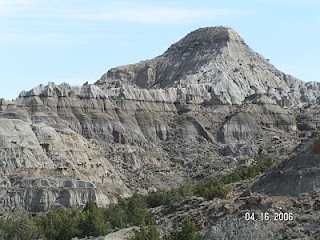 This month's Accretionary Wedge is being hosted by Highly Allochthonus. For my first ever submission to this Geo-blogging carnival I am adding an image I took in Makoshika State Park, Montana. I had the fortune to teach at a small community college near there for four years, and treasured the time that I got to spend exploring the park and prospecting for fossils. I use this image in class when I sedimentary rocks and stratigraphy, I also talk about the paleo-environment that would have resulted in the sandstone/claystone/coal beds seen in the picture, and because this image shows the K/T boundary between the Hell Creek Formation and the Fort Union Member of the Tullock Formation, I use it again when I talk about the K/T boundary.

An annotaded version is shown below 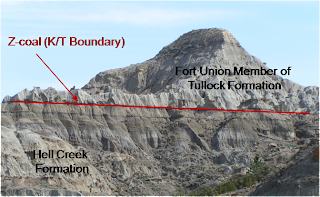 Although the iridium layer has been identified in the Hell Creek/Fort Union boundary, it has not yet been looked for at Maksoshika State Park. Also, the K/T boundary and the irridium layer have been identified as the lowest contiguous coal bed "Z-coal" the fossil record show the transition between Cretaceous and Tertiatry aged fossil to be a couple of meters below the boundary coal. Interestingly the distribution of Cretaceous fossils in this area was used by J.Keith Riby citation needed as evidenc of gradual extinction, while Sheehan et al. 2000 found evidence of abrupt extinction.

Philip
Posted by Philip at 3:51 PM

Gorgeous photo! Hadn't seen your blog before... Welcome to the geoblogosphere!

great image! I would love to use it an (non-commercial) natural history exhibition - would that be possible?

Yes images may be used under Creative Commons BY license.