So Sam had a series of softball games in Hood River on Saturday. I was excited about this because this was an opportunity for me to get into the Columbia River Gorge. Despite being in Oregon for almost 2-years, I had only been in the Gorge once on a return trip from Ape Cave on the southside of Mt. St. Helens. And on that trip it was dark and I was the only driver so I did not get to see much geology.

On this trip, either because she was more awake or because she knew I would be looking at rocks, Stephanie drove down to Hood River, so I got to gawk. I tried taking pictures from the car, but most did not turn out, but I did get one that showed the "cake layers" of the individual flows. This picture was taken at about mile marker 79 and shows the Washington side of the Columbia River. Unfortunately when I got the shot there were no cars (or better yet trains) on the other side for scale. 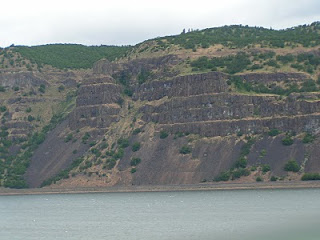 On the way home, I got this shot from the Columbia River Gorge Discovery Center Museum in the Dalles (exit 82). It does not have the same nice layers as the previous image, but it does show the layers dipping towards the river (SE) and it has a BNFS train for scale. 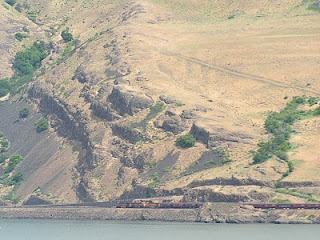 Oh  yeah, the softball game....  Won one, lost two (both by 1 run), Sam went 1 for 6 with her one hit being a nice line drive into center field. She made it to third when they missed the throw and tag at second, but in the end was left on base.
Philip
Posted by Philip at 5:01 PM