One of our other excursions over Memorial Day Weekend was to Multnomah Falls. This stop was largely  influenced by my talking about how basalt fractures when it cools. When basalt cools slowly it will create vertical fractures in hexagonal or pentagonal shapes, and usually when I talk about it I show this picture taken of Sam and Devils Tower National Monument a few years back 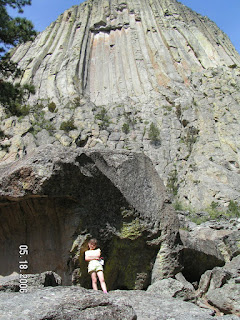 But thisi year I was looking for something more local and that showed the fracture pattern a little more clearly, so I showed this image that I took last year (on our way back from a camping trip at Magone Lake) of a road cut on the Middle Fork of the John Day River. Here is a view of the base of the pillars 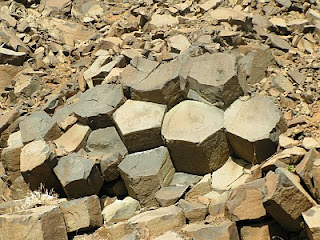 And here is a view of the pillars themselves, with Sam for scale. 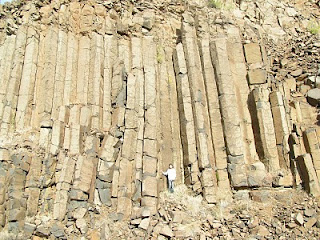 Because this location is off the beaten path, so I tried to think of another example in the myriad of Basalts around town when one of the student said, "You mean like at Multnomah Falls?" To which my only response was, "I don't know, I haven't been there yet."  This caused no end of chiding from my students, so when the opportunity came  up this weekend of course, I went. And sure enough up near the top are nicely fractured Basalts. 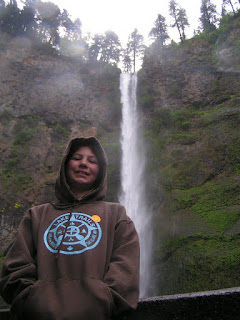 The exposure at Multnomah also has pillow basalts, and a big section missing from a mass wasting event that occured in 1996 when a block the size of a bus fell creating a wave that injured 12 people. 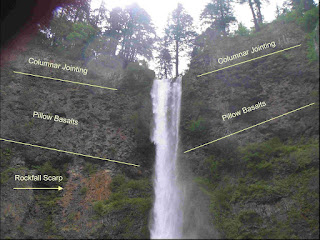 The areas of interest, especially the columnar basalts were still way up high and hard to see, even harder to get a decent photo especially with the spray from the falls. So in the end my students were right, and they got me to visit Multnomah falls, but I am still looking for a more accesible image to show my students.

One final thought about Multnomah, it is the quintessential American tourist stop. Breathtaking scenery right off the interstate (actually, you do not even need to get off). The only draw back is that from the interstate there is about a 200 yard walk (under the eastbound lane) to get to the viewing area. Maybe it was because it was Memorial Day Weekend, maybe it was because it was Saturday, maybe it is always that busy, but whatever the case I feel no need to go see it again.

Philip
Posted by Philip at 7:31 AM

Take the hiking trail from Horsetail Falls (a little east of Multnomah Falls) toward Oneonta Gorge. You'll pass under and behind another smaller falls on the way, under an overhanging section of basalt columns whose bases are exposed, showing the cross-sectional patterns of the bases. There's another patch of columns at a Land Trust property in The Dalles whose top surfaces are exposed showing the patterns clearly, but it's a bit more of a hike. I noted 4-, 5-, and 6-sided columns were most frequent, but found 7- and 8-sided as well as one nearly round (infinite-sided). Finally, I seem to recall columnar patterns on the trail immediately north of the Catherine Creek parking area near Lyle, WA.