Last week was THE RODEO in our town, as the kids had a week off of school so had decided to go somewhere else. So somewhere back in the spring we decided to go out to Washington DC to see family, see the sights. One of the things I wanted to make sure and do was get outo and see the Billy Goat Trail, which Callan from Mountain Beltway is constantly blogging about. We were even lucky enough that Callan took a break from field sampling to come up and give us a guided tour. 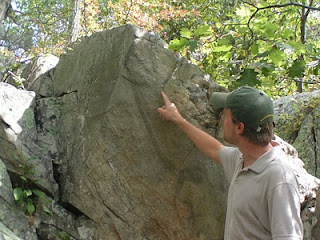 Even the non-geologists in our group really appreciated having such an exellent guide explaining the geology of the area. As much as enjoy the fact that Sam likes doing all this geologizing with me, I think her true scientific future lies in herpetology, as she spent most of the hike looking for frogs. Here she is looking for frogs in one of the potholes. 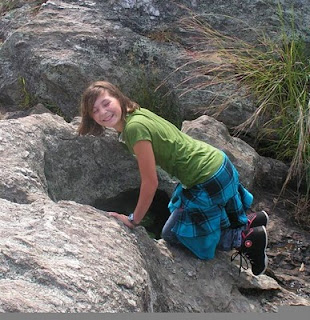 and later on Callan pointed out a lizard, which she quickly caught. 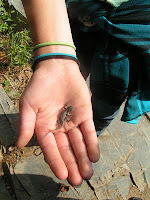 ﻿
We ended the hike at the Great Falls of the Potomac, which due to the water levels being low were mostly rock. 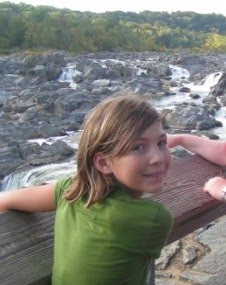 In addition to the BGT, we went to a number of monuments and museums. One of the museums we visited was the Smithsonian's Museum of Natural History.
On our hike of the BGT, Stanton had asked Callan a question about the shining (mica) minerals in the rock. The conversation led to shiny things and the Hope diamond, which is on display at the Smithsonian 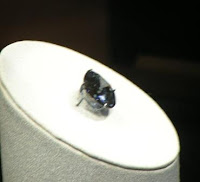 Callan remarked that in the room with the Hope Diamond, he was actually more impressed with the big piece of copper that everyone ignores. Stephanie sort of snickered and assured me that she would be looking at the diamond, but when we got to that room, even she agreed that the piece of Native Copper from the White Pine Mine (Michigan's Upper Peninsula) was really quite impressive. 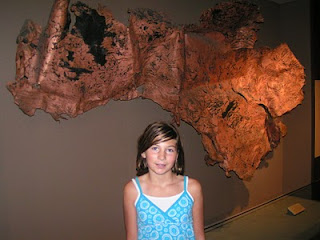 I actually liked the nice piece of gneiss,

but everyone did agree that the Hope Diamond may not have been the highlight of the room.
Philip
Posted by Philip at 10:08 AM