In previous posts, I wrote about our Rodeo Holliday trip that ended with a day at Heather Meadows on the side of Mt. Baker. The last notable thing about the trip was we had a great conversation about how science is supposed to work. At an earlier stop, I had pointed out the sun cups on top of the snow field, and mentioned that the how and why suncups form is a question that hasn't been completely answered. While exploring a snowbank Sam noted that there were suncup like features under the snowbank as well. 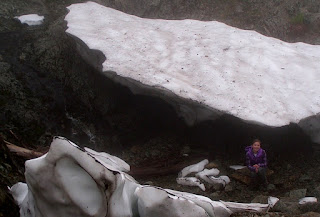 As we walked down the trail we made theories about how the suncup features would form on the bottom of a snowbank, and if the theories were testable. My theory was that it was based on the crystal structure of ice, but when pressed by Sam how I would test it, I did not have much of an answer. Her theory was the rocks under the snowbank (in the streams) initially forced the meltwater up over the rock creating the curved shape. Her test was to se if there was a correlation between cup location and size and an underlying rock.

At the next snowbank she ducked under to test her hypothesis 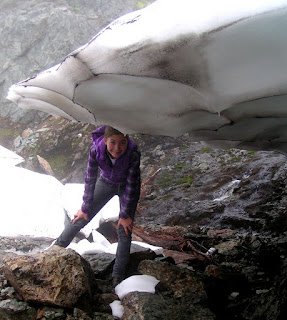 and sure enough there was a rough correlation between boulder location/size and suncup size. She repeated her observations at the next (last) snowfield we encountered and her subjective test held true. In the end she felt pretty proud she had come up with a theory that made more sense (to her) than her dad's and she was able to prove to him that she was right!
Posted by Philip at 1:09 AM