So Sam has been travelling over in Europe, and Stanton and I have been in the midwest. Hopefully we will put some posts up from that later. But yesterday, Sam was in La Grande for an orthodontist appointment (braces are in her near future), so I thought we'd take advantage of being in the Grande Ronde valley and try a hike, one I thought might be interetsing for a future field trip.

In the end, I probably would not take a class because it was a long drive (about 30 miles SE of Union or 20 miles NE of Baker) , a short hike, and limited geology, but it was neat.  Sawtooth Crater is the remnant of a Miocene aged shield volcano. The main feature is a central spire that raises about 420feet above the crater floor and two prominant radial dikes that extend to the NE and SW.

My picture of the central cone is not very good, I took it from where the trail comes up to the NE radial dike 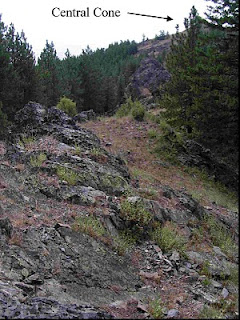 From that point, instead of going up to the central cone, we went NE towards the rim. From there we had some good views of the steeply dipping platy andesite that makes up the dikes. Here is a 1.45m Stanton in front of the ridge. 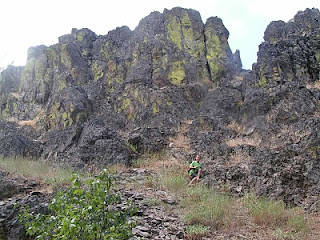 And here is a view of the same section of the dike from the crater rim, about 500m away. 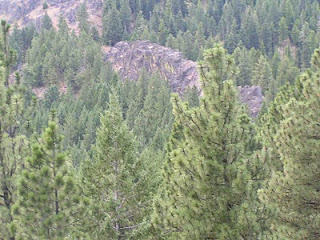 Along the top of the dike, the andesite formed thin, steeply dipping layers that are very angular (sharp) along the ridgeline 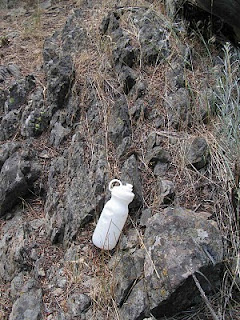 Although I did not see any evidence of tuff, in a couple of places along the rim, I found pycroclastice bombs 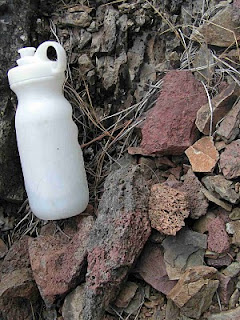 In all a neat little hike, but the long drive for a short hike. We had hoped to do another hike in the area, but it was getting late so we headed home
Posted by Philip at 10:47 AM