Once we reached the Ukiah turn-off, we headed west towards Heppner on US Forest Road 53 on the Blue Mt. Scenic Highway. This stretch of road goes over the Blue Mt. Anticline, and a paper by Edwin Shorey  (1976, Geology of Part of Morrow County, Northeast Oregon, Masters Degree Thesis, Oregon State University) suggested that you could map the outcrops over the anticline showing the progression to older units and then back again.
I had been a little worried about this stretch because it is unmaintained in the winter, and it had been drizzling/raining lower down, but the sun came out and it was mostly a nice drive with just a little snow on the road at the summit.
Our first stop was a Pillow Basalt oucropping that Stan had told me about. When I had driven the road before, I went right past it, but this time (knowing it was about 3 miles up the road) we saw it. Nicely formed pillows beneath a more typical CRB columnar basalt
﻿ 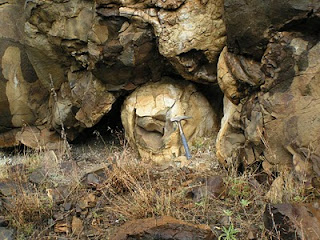 Most of the pillows were about 50cm in diameter and well formed, with 2-3 pillow layers reaching a total height of about 2meter. The whole exposure was only about 100m long, with the good pillows being confined to about 20m.  ﻿ 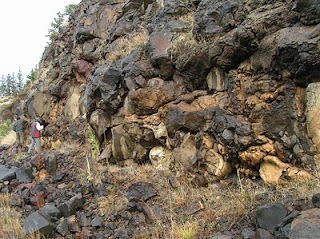 After the pillow basalts, we continued up over the road for about 8 miles. By and large, there were no rock outcrops or road cuts through this area, and what there was consisted of broken basalts. We stoped at a gravel pit hoping for a nice compotent outcrop but while there were no faces in the gravel pit, the road cut on the other side had some intact basalt columns. 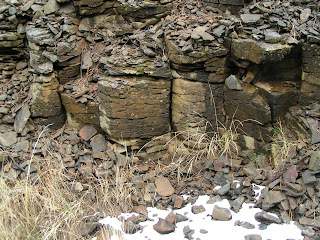 Mike cleaned the debris off the top of one of the column so that we could see the hexagonal shape going back into the outcrop. 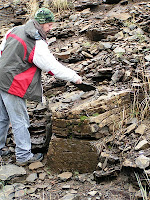 As we proceded on towards the axis of the anticline we came into the Herren Formation. The Herren Formation is interpreted on Birch Creek as being Fluvial sequences of arkose, mudstone, and shale with Leaf Fossils that indicate an early Eocene age. The Herren Formation also has localized coal seams that give the area its name "Coalmine Hill". We spent some time looking for leaf fossils but did not find any. 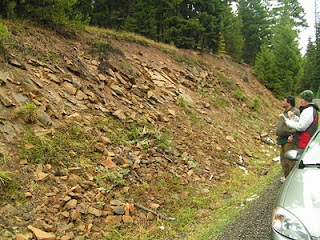 At the bottom of Coalmine hill, there is an outcropping of late Jurassic aged tonalite that is similar in age to the granite we saw on Battle Mountain. Although outcrops looked similar, the tonalite outcropping was more competent than the granite, and there were large (5mm) biotite crystals in the tonalite. 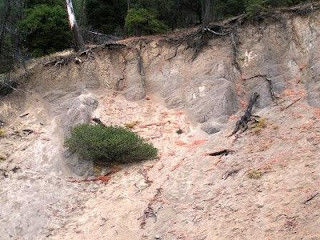 Also intruded into the tonalite were veins of a powdery fine grained mafic material. There was evidence of contact metamorphism along the edges of these veins, but what was interesting to me was that the core of the vein had a powdery texture. I think what we were seeing is evidence of Tertiary intrusions, but why they are no competent veins I guess I do not know. 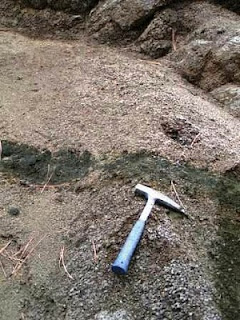 On our down Willow Creek, we ran back into the Herron Formation on the other side of the anticline axis. Here, different beds of sand could be visibly seen and were dipping strongly back towards the axis of the anticline. Overlying the Herron Formatio was a nonconforming contact of river cobbles and gravels. We spent some time practicing with our Bruntons and then moved on, but this was an outcrop I'd like to spend more time looking at. 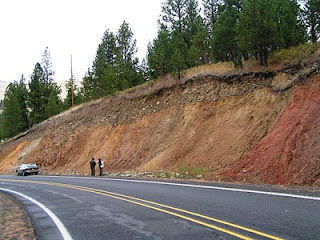 Our last stop was back in the CRB's looking at columns again. These colums were smaller, but not vertical. At this location we saw columns oriented in all directions with some dipping as much as 50 degrees. 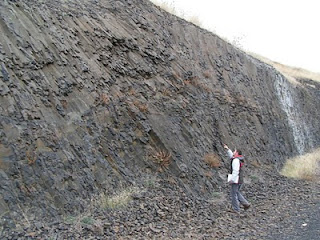 Also at out last stop we noticed this little guy.I was pretty surprised to see him out on such a cool day in Late October, but there was a little sun that he was enjoying. 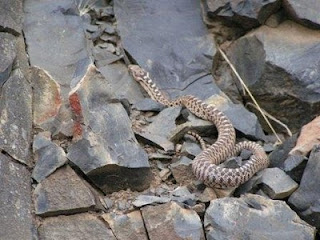 We hunt in this area and are very familiar with it. This month Oct. 2014, the camp host at Cutsforth Park showed us fossilized leaf imprints in gray (possibly) slate. He said that Geologists from Arizona State (University) took 500 lbs. of it off of Arbuckle, near the road. We drove the entire length of Arbuckle road over the top of the mtn. several times during our hunt, but never found rock the color of the samples at the park.Can anyone help?