Last week I took two students on a drive to look at some of the rock outcrops in the area. I often complain that all you ever see around the area are Columbia River Basalts, but we did find some other outcrops too. Our first stop was a whole 1/4 mile from the college parking lot, at the bottom of the hill. From there we got a close up look at the ubiquitous CRBs in the area. The three layers seen in this photo are accross the river valley from the same (but better) formation I posted about in September. 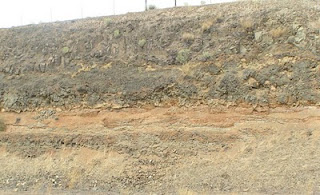 The top layer, characterized by the grayer more blocky rock is the Frenchman Springs member of the  Wanapum flow. The broad reddish band in the middle is the Vantage soil horizon, on the edges of the horizon there are some baked contacts where the clayey soils have been baked into a marble. At the bottom, looking more like a talus field in this image is the Sentinel Bluffs Member of the Grande Ronde Flow.


In class we have been talking about weathering and sediment transport in class so our next stop was at some Late Miocene deposits in the McKay formation. The alluvial beds are mostly sand, gravel, and cobble, but on some of the north facing slopes there is also Pleistocene Loess. 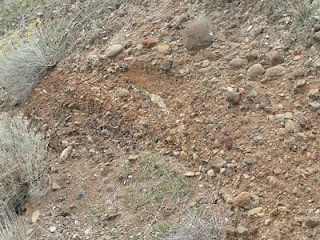 While poking around, one of the students noticed some mechanical weathering on one of the cobbles, so we could nicely compare the differences between material that had freshly weathered and materiails that had been rounded through transportation. 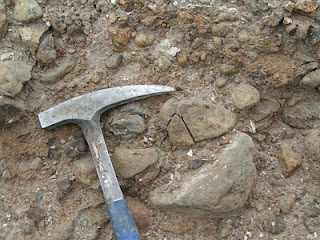 The next stop on our field trip was a road cut through Cretaceous aged intrusive outcrop of granodiorite just north of Battle Mt. State Park. The outcrop is heavily weathered with a 5m pile of scree at the bottom, and a nonconformity with the Miocene Grand Ronde Basalts above it. 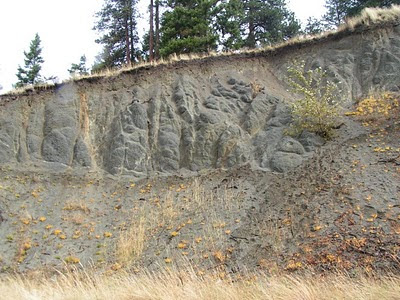 From the road, the cliff looks real nice, but when you get up close to the rock you notice it is full of quartz veins and really crumbly. We investigated whether it was just excessive surface weathering by digging in 10-15cm with the rock hammer, but it still came out crumbling in our hands. Because the formation is near some thermal springs, we posited that much of the rotten nature of the rock was due to historical contact with some of these thermal features.
Most of the quartz veins were fairly competent, but there were some that had almost pure quartz powder. This vein was fillled with quartz grains that had the size and texture of white flour. 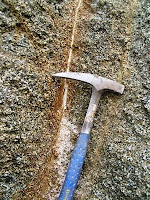 After Battle Mountain we continued on 395 to  Ukiah and the second part of the Field Trip was over the Blue Mountain Scenic Highway from Ukiah to Heppner.