In Science Class we are studying Biology and today we had a live lamb and a dead lamb brought in. We have a few class clowns and they wanted to name the live lamb Lamb Chops.


Oh and a fare warning if you do not like to see blood please do not look at the pictures. So as I said we brought in a live lamb and a dead one [Philip says - the science teacher's friend raises sheep, so the lamb brought in for dissection was one which did not survive the spring weather]. We also got to dissect the dead one. As we were dissecting the dead one we let the live lamb roam around the class room. But before we started dissecting we got to feed the live lamb. 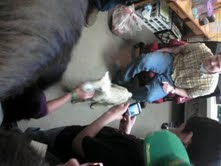 When we were done feeding we finally got to open up the dead lamb. After we opened it up we took out the heart then we took out the liver and gallbladder after that we got to feel around inside of it and I think some of my classmates went to extremes on that. 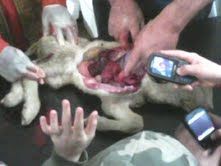 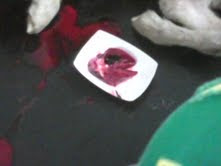 After a while of letting people feel the lambs inside we cut open skull to see the brain. As we were cutting open the skull you could hear it crack every time we moved the knife. Then we let people feel the brain and after (almost) everyone felt it Mr. S asked what it felt like and if we could describe the difference between the brain and the intestines. They all answered that the brain was hard and not as "squishy."
Lamb's Brain 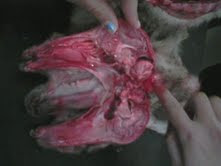 After people got to feel that we took out an eyeball. When I got to hold the eye I observed that it was hard and not as soft as the intestines or stomach. Which surprised me because I always thought an eye ball was softer than that.
Lamb's Eye 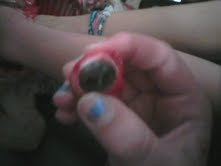 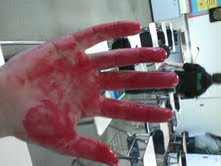 Science today was really fun and I hope that the sixth grades next year enjoy it to.
Sam
Posted by Sam at 3:59 PM

lol, cool...im not a huge fan of dissecting but i will do it, i wanna be a medical scientist when I'm older. I'm dissecting a lambs heart tomorrow