So on our trip to Arches over spring break, we were passing through Spanish Fork Canyon on Highway 6 when I saw this unusual outcrop appear along the road, but only on the north side of the highway. 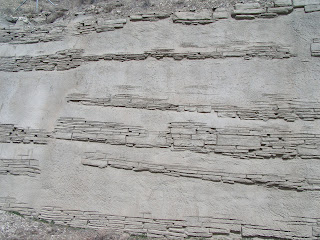 It was cold and raining so Sam did not want to get out to give scale, but the whole expose is about 3meters. I got a closer look and it is a Anthropocene age sedimentary rock that is clearly well cemented. But whas was interesting was the series of lenses (ranging from 20cm to about 80cm in thickness. Based on their "hatch" pattern they are clearly limestone, but on closer inspection, they do not appear to be any different from the surrounding material. Also intneresting is the highly localized fault that apppears in the leftcenter of the outcrop of the picture. The one lens is clearly offset, but there is no fault scarp and the faul does not appear to extend to the lens at the bottom of the outcrop.

Sedimentary structures are not my strong point, but this was one of many interesting outcrops we saw on the trip.

looks like a cyclothem with alternating layers of "massive urbanite" and "jointed masonite."