We went to Salt Lake City to visit Sam's grandparents over the Christmas holidays. They informed us that the Utah Museum of Natural History at the University of Utah history had moved into a brand new space. We make it a habit to visit natural history museums, and from my time at the UofU, the Utah museum has always been one of my favorite.

The major corporate donor for the new building was Rio Tinto, so the building had a beautiful copper sheeting and a great location up on the "benches" right next to Red Butte Gardens. 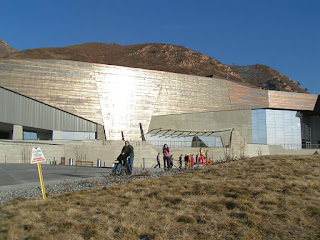 It was clear that much of the emphasis in the new facility was highlighting the extensive collection of dinosaurs. The building was designed for museum gowers to enter directly into the hall of dinosaurs, and snake their way through (most of) the rest of the exhibits. (We ended up missing the space science and formation of the planet exhibits because they were on another floor and unconnected. Only when I looked at the map as we were leaving did I realize we had missed it.)


I really appreciate it when you can get a scale for how big some of these creatures were. This picture of the sauropod was taken from the balcony overlooking the dinosaur area. It was my best attempt at getting the whole of the skeleton in the field of view of the camera.﻿
﻿ 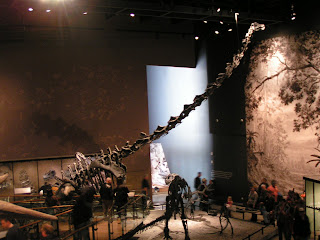 This picture was a little closer up, and uses Sam as scale for the hind foot of the Sauropod. The perspective is a little off because of the distances, but the total ground to hip distance is a little over 3 meters. 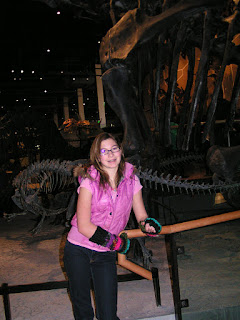 Utah his famous for it Jurassic aged dinosaurs, but I didn't know there were Cretaceous aged fossils too. The museum also had a small room (and map) with some of the Cretaceous dinosaurs found in the state. 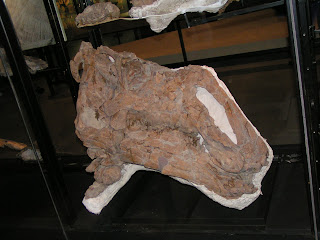 There was also a cast of the skull of a T. Rex (I think Big Al). I remember this cast from the museum when it was at the previous location, and it is certainly an impressive piece. My only real critisicm is that it is in a display case of Cretaceous aged fossils found in Utah, and it is suggestive that it is a Utah fossil (to be fair, the tag identifying it says T. Rex skull from Montana, but I still found it misleading). 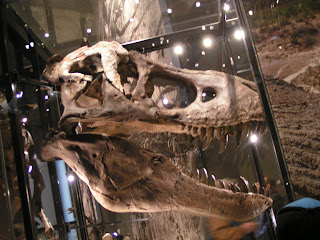 One of my favorite displays, and one that certainly highlights the advantage of a new bigger space, was a wall with a cladogram showing different ceratopsin skulls. 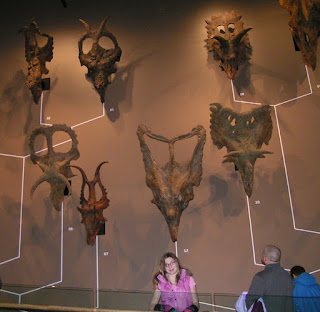 The remodel also updated many of the informational signs. They were much more colorful and had good interpretive content.

From the hall of dinosaurs, the meandering path went to an area on the ecosystems (past and present) of the Lake Bonneville and the Great Salt Lake. It was a nice display. but it seemed a little out of context. Also, I spent a good amount of time looking for a display, or information about the draining of Lake Bonneville through Red Rock Pass, but I never found it. Maybe because it happened in Idaho...

From the Salt Lake area, it was back into general geology and a discussion of the ecoregions of the Basin and Range Provincne. A nice diagram of the Rock Cycle 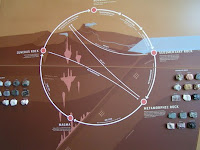 A somewhat crude, but interactive display where you got to pull apart a piece of plywood to see the formation of Basins and Ranges

A seismograph from two (there was room for three) locations tracked by the University of Utah Seismograph station
﻿
The main hallway ended in the biology area, which certainly much updated and much improved from the 1960s vintage stuffed animal displays that the old museum had. But when I got here, I thought where were the minerals! The old museum had one of the best displays of minerals I had ever seen. You could have taught a whole segment on minerals to a intro geology class at the previous display. It was a spaceous display showing minerals by property (hardness, cleavage, mineral habit, luminesence, etc), by family (silicate, oxide, sulfide) etc, as well as displays minerals common to Utah. I LOVED the old display and figured with the new building it have updated displays.

I was disappointed to say the least. The new Mineral display was one tiny hallway, located out of the way, with only about 1/4 of the minerals on display and not with the same level of detail.
. 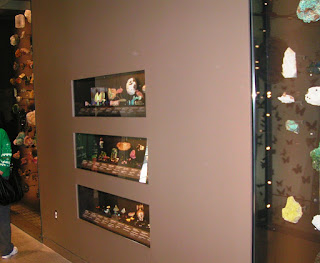 Some of the old displays had been moved﻿, like the minerals that exhibit, flourescence 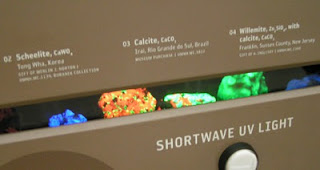 But most of the new displays just showed minerals, with their associated names. 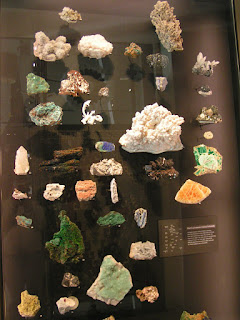 In all, the new museum had a much nicer biology display, and the focus on dinosaurs was evident. But I was sadly dissapointed that the flow of the museum didn't always transition well from one area to the next. The museum nicely went through the first four floors, but then the space science and mineral displays were off the path and woud be easy to miss. But most of all I mourn the loss of what had been one of the most complete mineral displays (second in my mind only to the Smithsonian).
One final observation, on the day went Sam's Grandmother was in a wheelchair. I think every architect in the country should have to spend a week in a wheel chair before gettting a license. While the building was fully ADA compliant (and I would bet the old one wasn't), it was not very wheel chair friendly. Some of the ramps were out of the way, and many of the displays (specifically books of pressed plants for the Basin and Range ecozones) and placards were at a convient height for a standing adult (or over the h﻿ead of someone in a wheel chair).
In all, it was still worth the visit, but it no longer is in my "top five"
Posted by Philip at 5:53 PM

Thanks for the review! Christopher was married at Red Butte in september and the new museum was not completed at that point. I was disappointed since I have such fond memories of the old one and was hoping to take the kids.
Hope the rest of your visit was fun and all the family is doing well.