In a previous series of posts I mentioned that for the Rodeo Holidays we went to Mt. Baker after being at the San Juan Islands. We did not spend long on the San Juan, but we did get a flavor for the area. The day started with a stop at Deception Pass State Park. The park encompasses both sides of the channel that forms between Fidalgo Island and Widbey Island and the Iconic bridge that joins the two island. 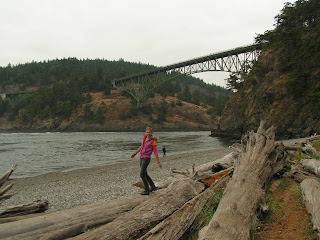 Deception Pass connects the Straits of Juan de Fuca and Skagit Bay, and during the change in tides, the difference in response rate between the Bay and the Strait cause a visible current through the pass, sometimes resulting in standing waves and whirlpools. We came through just as the tide was turning so we were able to see the current, but not the large standing waves.

From Anacortes (just north of Deception Pass), we took the ferry to the San Juan Islands. The San Juan Islands consist of an archipelago that represents a submerged mountain range that connects Vancouver Island with the mainland. The Islands are largely composed of Paleozoic aged sedimentary rocks which have been folded into a broad east/southeast plunging syncline. The sedimentary rocks have been intruded and metamorphosed by Mesozoic aged igneous activity. During the Pleistocene, the mountains were heavily glaciated so many of the straits and channels have fjord like characteristics. 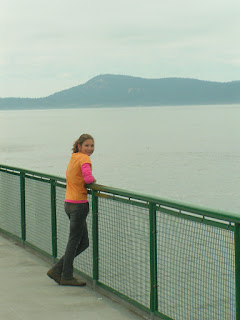 Within the Paleozoic aged sedimentary rocks are lenses of Devonian aged limestone. These limestone deposits are accessible on San Juan Island near Roche Harbor and at Lime Kiln Point on San Juan Island. In fact Roche Harbor was a company town dedicated to the production of Lime, and much of the historic town infrastructure has been retained by the resort that now owns the town. 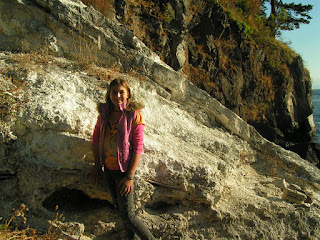 According to the informational sign located at the site, typically two loads of lime were produced each day by dropping softball sized chunks of limestone in a hole at the top at the top of the furnace.

3 1/2 loads cords of wood per load were into the sides to keep the furnace temperature near 1100 degrees C.
The heat removed the CO2 leaving behind powdered lime (CaO) that fell through a screen in the furnace. The lime was scraped from the furnace into barrels (100 per load) and shipped by sea to Roche Harbor where it was then sent to Seattle and beyond.

Lime production continued from the San Juan's until 1923. Although the limestone was high quality for producing lime, the fact that lime explodes on contact with water meant shipping lime from the San Juans was hazardous, eventually lower quality limestone deposits inland that could be shipped by rail became more economical and the lime business in the San Juans ended.
Posted by Philip at 1:45 AM