Ok, so its been a while since I have been able to sit down finish posting about our trips last summer. After our trip to Sumpter/John Day, we spent a week at the coast. Most of our time at the coast was spent playing in tide pools and seeing non-geology things, but I did take one picture of some barchan dunes on the beach below the Yaquina Bay Lighthouse. 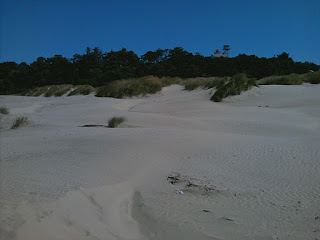 On the trip back to the east side of the state, we took the scenic detour through the desert high plains. This allowed us a stop at Crater Lake, which Sam had been wanting to go see ever since we moved to Oregon.

We got to the park about 1 hour to late to take the boat ride (next time Sam) so we did the obligatory drive around the lake. Sam's favorite stops was at Pinnacles, where the steam from fumaroles welded together the overlying pumice and ash into an erosion resistant hoodoo. 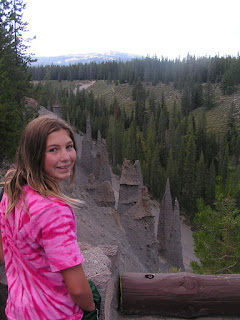 On the way back from Pinnacles, we stopped at the new trail in the park, a 2.5 mile out and back to Plaikni Falls. It was a nice little trail through the woods, and the falls at the end were a nice surprise (ok I knew there was a waterfall, but it was more impressive that I had anticipated). Sam, however was tired, so by the time we got to the falls she had transformed into a bit of a sullen teenager.


I think overall, Sam was a little disappointed in the lake. (I found out later that, being who she is, what she really had wanted to do was go swimming in the Lake. She didn't expect only one access to the lake that was 2-3 miles down a steep trail to a non-existent beach that would have been hypothermia inducing cold at that rate!)
Posted by Philip at 11:30 PM

A little farther north, Diamond Lake is very swimmable, and has sit-on-top kayaks for rent, etc. I found that pairing Crater and Diamond Lake made for a really nice long weekend. If you ever get back to the area, I suggest you consider it.