In science we have a thing everyday called "interesting science fact of the day." this week all of them are based either on electricity or lightning which technically speaking are the same. Even tho lightning bolts have electricity the charge is brief so you couldn't use it to have a reading lamp on for thirty minutes. Lightning is an electric current ( electric current is the continuous flow of electrons within a conductor.) Within a thundercloud, many small bits of ice bump into each other as they swirl around in the air. All those collisions create an electrical charge. After a while, the whole cloud fills up with electrical charges (usually with a negative charge closest to the earth). Since opposites attract each other, that causes a positive charge to build up on the ground beneath the cloud. The ground's electrical charge concentrates around anything that sticks up, such as mountains, lone trees, people, or even blades of grass. The charge streaming up from these points eventually connects with a charge reaching down from the clouds, and--zap!--lightning strikes.

Have you guys heard of the Chaiten Volcano in southern Chile that erupted on Sep. 22, 2008 if not please click the date erupted and you will find a article. This volcano has lightning in its ash cloud. 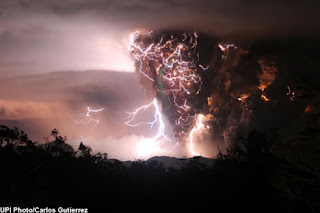 I went on to google.com to see why there is lightning in a ash cloud and I found this on answers.yahoo.com they had what they called "the best answer" which is this...
The same process that goes on in any thunderstorm, rising turbulent warmer air causing static charges because of friction in the air, is being artificially created around the warm rising turbulent air from an eruption. Not only is ash rising, but huge amounts of hot water vapor is released as well. As the water vapor cools in the upper atmosphere, not only do you get lightning and thunder, but it also is likely to rain heavily which makes the ash fall even worse when it falls on top of buildings, by adding a lot of water weight to the ash. I saw a documentary on Mount Pinatubo in the Philippines recently on National Geographic and they showed the whole process. This only happens when there is a violent eruption. The low, slow flow like that in Hawaii does not cause any local weather effect as a violent explosive eruption does.
So that is a little bit about lighting and volcanoes.
Posted by Sam at 11:00 AM