U of O Natural History Museum

We were in Eugene on Friday because Stanton was singing in the State Honors Choir. While he was at rehearsal, we decided to check out the Museum of Natural and Cultural History on the University of Oregon campus. The museum is small with one large room dedicated to the cultural history of the four regions of Oregon. There is a smaller room with a permanent geology display. Placards outlined the geological differences between the Coast, the Cascades, the Columbia Plateau, and the Basin and Range parts of the state and beneath the placards were small geology displays. Beneath one of the placards was a display case that had the major rocks found in the different areas of the state. 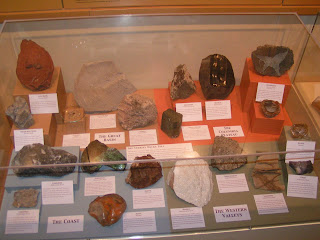 And that was more or less the extent of the permanent geology display. I was kind of disappointed there wasn't more on gems and minerals, or at least sunstones (the state gem) or thundereggs (the state rock).

The discovery area was another small room where there were an assortment of hands on activities for kids and kids at heart. One was a simple cubbyhole cupboard with different rocks divided into igneous, metamorphic and sedimentary categories. To each rock was glued an identification card and some questions about the rock and there was a magnifying glass close at hand so you could look closely at them. 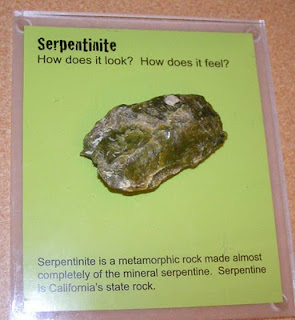 Next to the discovery area was a small Paleolab, where kids could "find" specimens, describe and investigate them, and finally classify and catalogue them. Sam had fun here, dressing up in the lab coat and playing with the caliper to measure a piece of petrified wood. 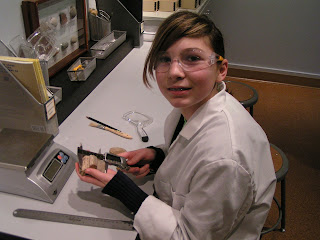 The best exhibit was a small temporary exhibit (through April 2011) on the fossil evolution of horses and the change in horse evolution as it relates to climate change, much of which comes from fossils found in the John Day Fossil Beds of Oregon. 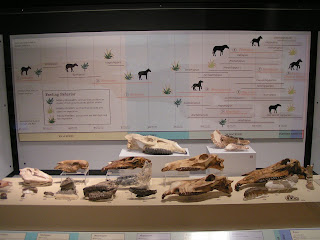 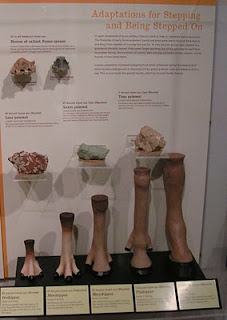 In the discovery area, they had puppet horse feet that you could try on soft surfaces (forest) or hard grass lands. Sam like the last one because since a modern horse essentially runs on its middle finger, you essentially put your hand in the puppet with your middle finger out. 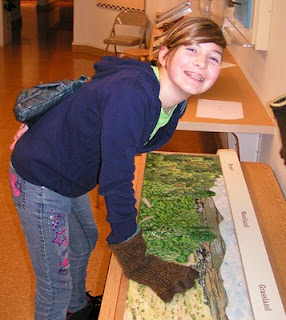