After Stanton's concert on Saturday, we headed for the Oregon Coast and drove north from Florence to Lincoln City. It was warm, but very windy and raining hard so we did not make as many stops as I wanted, but I guess that gives us reason to go back.
Our one long stop was at the Cape Perpetua area. Even though it was low tide, the wind was blowing the waves into the basalt nooks putting on a very good show of spouts and sprays. Sam went exploring tide pools while I tried to get pictures of sprays and rocks. It was interesting walking on the basalt because despite all of the rain and wind, the traction was very good. It was also interesting to see the basalt fracturing into fins that ran mostly perpendicular to the coast. Because of the rain I really didn't get any good pictures other than this one of Thor's Well
﻿
We had a lot of fun, but it was wild weather. I haven't been in rain/wind like that since I was on othe Juneau Icefields in 1991. After about 20 minutes we were soaked to the bone, but we had fun! 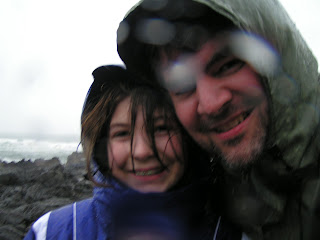 You'll definitely have to get back to the coast in better weather, for that's not exactly the postcard view of Heceta head. I spent more time in the Cascades than at the coast, but the beaches and dunes around Florence and the Cape Lookout area are definitely not be missed.

I will always love Lincoln City. I look forward to taking all the kids there when we get back from this current adventure.