So I had to take Sam over the hill today for an orthodontist appointment. As we left this morning, we both noted the morning fog was pretty dense, and as we climbed up on Cabbage Hill, Sam got out her phone to take pictures of the fog in the valley's, she said it was pretty. I was thinking "inversion." 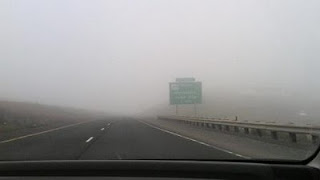 So on the way home, we stopped I kept track of the temperatures as we came back down off the anticline. We stopped at an overlook just pass Dead Mans Pass an elevation of about 3600'. The temperature was 42F, it was mostly sunny and you barely could see Mt. Rainier 180 miles away. We entered the Fog bank appropriately to Pink Floyd's "Is there anybody out there" track off The Wall, and with in a mile, the visibility dropped to less than 1/4 mile, and the temp plummeted to 34F. 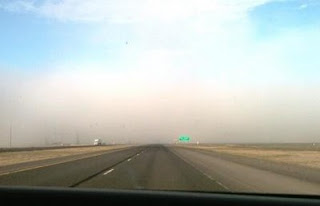 The long and short of the science is over the past few days High Pressure has been building over the Columbia Plateau, generating stagnant air warnings in the Portland and the Columbia Basin. In the morning, the cold air gets trapped in the valley where it meets the warm moist air that comes up the Columbia River creating a fog. That fog prevents sunlight from warming the air keeping the cold air inverted under the warmer air above.

On a final note, when we got home, there was even drops of rain falling on the driveway. I pointed out to Sam that it was weird given how sunny it had just been on the hill. She looked at me and said "its not rain, its the water moisture that makes up clouds coming out [condensing] on the tree branches and then dropping." When I noted she was correct she added, "just thinkin' like a scientist!"
Posted by Philip at 1:32 PM